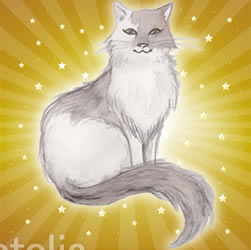 Q: When did Sabrina know she wanted to be an actress?

A: As a kitten growing up in Rego Park (Queens, New York), Sabrina tried out for the role of Juliet in her elementary school’s production of William Shakespeare’s Romeo and Juliet. She got the part and was a resounding success. According to the school principal, Sabrina received more standing ovations than any student ever had. Sabrina continued to take on roles in subsequent elementary and high school productions, as well as performing in community theater during the summers.

Q: When did Sabrina first realize that she could be a good actress?

A: When she first tried out for the role of Juliet.

A: Yes. After graduating from high school, Sabrina attended the universally-acclaimed London Shakespeare School of Drama on a full scholarship, where she received her formal acting training. She appeared in numerous productions under the tutelage and direction of renowned stage actors, directors and producers. She graduated with a BA (Hons) in Acting with a concentration in the History of Drama.

Q: Why is she called Dr. Pound?

A: Sabrina was invited by a leading university to be its commencement speaker. After delivering her “I Challenge You” speech to the graduates — which was so inspiring that it was turned into a best-selling book by the same name — she was awarded an honorary doctorate degree in acting. She has been known as Dr. Pound ever since.  See photograph of Sabrina giving commencement address.

Q: What does Sabrina enjoy doing when she is not acting?

A: Acting is Sabrina’s greatest passion. When she is not acting, however, she enjoys spending time with her family, seeking out new business ventures, and working on various charitable endeavors including through her own charitable foundation.

Q: Is Sabrina close with her family?

A: Most definitely. The oldest of four, she is perhaps closest to her brother Tiger, who has appeared in a number of her movies and for whom she has garnered a number of highly successful endorsements. From the time they were kittens, Sabrina has always been very protective of her brother. She is also very close to her two younger sisters, Annabelle and Paulina, both of who prefer to stay out of the limelight. To them, Sabrina is not the glamorous, multiple award-winning, Hollywood A-list actress that the world sees, but their slightly smaller older sister who as a kitten fell off the playground slide spraining her tail.

Q: Does Sabrina have any upcoming personal appearances?

A: Sabrina has always had a great appreciation for her fans and is always eager for opportunities to engage with them. However, much to her dismay, she has no personal appearances planned for the near future due to her very hectic schedule.

Q: How can we learn more about Sabrina?

A: The best way is to keep checking her Facebook page.

Q: What’s next for Sabrina?

A: In addition to spending time with her family, devoting time to her charitable endeavors and continuing with her television shows and her Las Vegas musical, Sabrina is also currently considering a number of movie projects, including starring roles in a couple of comedies. She may direct a full featured historical drama, which, as an avowed historical buff, is of particular interest to her. She’s also writing her biography.

Q: Anything else you can tell us about Sabrina?

A: “Sabrina Pound” is based on a real cat named Sabrina who came from a shelter — and hence her name Sabrina Pound. The Sabrina who is described on this website is exactly how she personifies herself to those who know her. Sabrina is a beautiful and loving, and headstrong, feline who is adored by her family. While there is only one Sabrina Pound, there are so many other wonderful cats (and dogs) who find themselves in shelters. Anyone thinking about adopting a cat (or dog) should consider doing so from an animal shelter.